Can one really have online anonymity? To stay anonymous, one needs to follow the rules of technology physics, and psychology.

If you think that the level of online anonymity provided by the encryption system of bitcoin and its other cryptocurrency brethren is high, then wait until you see what Dark Wallet can do to make your online transactions even more hidden from prying eyes.

Just what is Dark Wallet, and how does it work? Dark Wallet is the brainchild of two individuals – Amir Taaki, a free-market anarchist of Iranian and British descent, and Cody Wilson, who rose to fame when he printed the very first, fully-working 3D printed gun. The two men tandem has long since grown after the conception of Dark Wallet, and now includes notable figures from the cryptocurrency, unSYSTEM and Libbitcoin fields, among others.

The promise is that Dark Wallet will provide an even more private way of acquiring online anonymity through the use of bitcoin and when doing transactions in virtual marketplaces. As bitcoin became somewhat of a mainstream phenomenon, governmental bodies have been taking action in restricting and decentralizing the cryptocurrency. Dark Wallet’s prominent feature, which is to provide total online anonymity by being a bitcoin transfer and storage platform, seeks to return bitcoin to its original decentralized, anti-establishment roots. The app is poised to completely conceal any and all users’ identity, even stronger than what bitcoin promises.

But how does it hide the cryptocurrency transaction? Via CoinJoin mixing and stealth payments. Dark Wallet hosts its very own independent system of bitcoin exchange, meaning that anyone who has this software can sell or buy bitcoin without going to any other exchange platform. Online anonymity is observed by the user not needing to provide any personal identification or information. The CoinJoin technology lets a particular transaction merge and join a bitcoin transaction in random at the same time. The blockchain transaction records will invariably join together, and the encrypted multi-party sale is encrypted further within the Dark Wallet software to block out any virtual eavesdroppers. The Stealth Address feature works where any user can generate a “hidden address” paired up with a secret key, then publish the address to the sender or the receiver. The bitcoins are then sent to another address that is an encrypted version of the stealth address.

Dark Wallet started out as an idea by the two freethinkers, and sought help for funding by posting their idea on Indiegogo. The duo immediately launched a comprehensive crowdfunding campaign that generated around $50,000 and other funds in bitcoin currency. 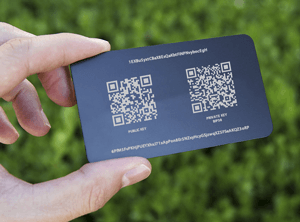 The potential online anonymity of Dark Wallet is enormous. By itself, it can be used to power darknet market and illegal trades that are covertly carried out on the dark web. The online anonymity factor is a huge boon to black market transactions such as the renowned Silk Road, which was taken down in October 2013.

Dark Wallet fills in security holes in anonymous bitcoin transactions. Bitcoin transactions have become more and more transparent, due to the fact that each payment is recorded on a blockchain, which is like a public record. This blockchain is copied and sent to thousands of computers in order to prevent bitcoin fraud and virtual forgery within the network. The addresses themselves can be traced back to the user if the government agency or any corporation looks hard enough.

Dark Wallet developers admit that the software application is still in the early stages of progress, and a lot of work is needed to make it fully realized. The online anonymity software itself is labeled at an alpha stage and is far from being complete. The built-in app may be installed in a Google Chrome browser, with support for Mozilla Firefox web browsers coming in soon. Dark Wallet has paired up with Chip Chap, an app where you can convert Euros for bitcoins, and vice versa. The developers are also urging interested communities to test out their online anonymity application and are looking for suggestions to make it even better.